When I was a teenager my mother would say,

“Your friends will come and go, but you’ll always have your sisters.”

That sentiment has been true for us.  And my mother should know.  She had sisters, too.  My family is filled with Three Sisters.  I have two sisters (Donna, Debbie, Rhonda), my mother had two (twin) sisters (Pauline, Pam, Jean).  My mother’s mother, Lena, had two sisters (Lena, Mabel, Edna).  On the other side of the family, my father had three sisters (Stella, Thelma, Hope).  The May 2016 issue of Vanity Fair devoted the entire magazine to “Sisters.”  Reading through the articles we find that often sisters are the one who has your back, they are our best friends, and our trusted partners.

Although I think my mother’s sentiment is true, I also think

having sisters prepares us to be good friends.

My sisters and I all have long-term friendships from high school.  Over the years we have made many other friends as well.  While these friendships are important to us, the bond of sisterhood has always taken precedence.  Like a marriage, we are together in sickness and in health.  My sisters attended my first communion, my confirmation, my high school graduation, and my college graduation.  I was one sister’s maid-of-honor and the other’s bridesmaid.  We are all godmothers to each other’s children.  We’ve attended all the family functions together – weddings, christenings, funerals, Fourth of July parties, family reunions, showers.  When I had an accident in 1985, my mother and both my sisters visited me that night to hear all the details and make sure I was okay.  When I had to have minor surgery in 1991, I stayed at my mother’s house while I recovered; one sister made me my own tin of toll house cookies, the other brought over a pot of barbequed spare ribs.

When I was in my early twenties, everyone from high school used to go to a nightclub in town.  The place would be packed, wall to wall, on a Friday night, standing room only.  While I knew many, many people in the club and talked and joked with many of them, I was always happy when my sister showed up.

She was like an anchor I could return to after any other conversation.

But, more often than not, I was happy to just hang with her and make observations about the people in the room, or just talk about our own lives. 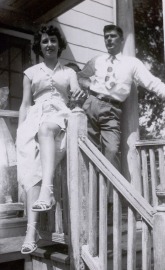 After both sisters got married we started a tradition: unless another commitment came up, we would meet at my mother’s on Sunday.  At first our Sundays were quiet times where we shared our weekly happenings at work, adventures with friends, things we bought, deals we got, recipes we found, clothing we purchased.  We discussed politics, world events, and the latest scandal in the local newspapers.  We might tell each other about the movies we watched, giving a scene by scene description encouraging them to see the same movie, or telling the funny parts, or the most dramatic.
The quiet of our Sister Sundays eroded when the children were born.  As they got older and louder and more demanding, my mother set up the cellar as a play room.  Rarely was a full thought or a full paragraph uttered without interruption.  Gleeful chaos.  I didn’t see it that way then.  Then it was mostly annoying.  But I look back on those years fondly as gleeful chaos.  Sometimes our grandmother and Auntie Pauline would join us. My mother lived with Auntie Edna, so she was always there.  Woomania, my brother-in-law called it.  All the women. 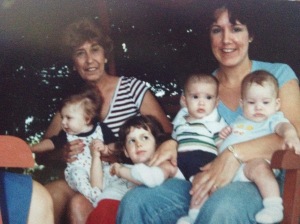 The children eventually grew, as children do, and stopped coming on Sundays.  Our Sundays got quiet again.  We still shared the latest gossip, world events, and trivial minutia of our lives, but now sans the constant disruption and disarray.  Auntie Edna died in October 2000.  My mother sold the house and moved to a smaller place.  One sister stopped coming on Sundays.  My mother, the other sister, and I continued to meet and go to dinner and share our lives.  A few months before our mother died I asked my sister, “Do you still want to get together on Sundays?”  “Sure,” she said.

My sister and I still meet every Sunday.

My friends know not to ask me to do things on Sunday.  I’ll be with my sister.  When we met at my mother’s we sat around the kitchen table, talked, went out to a restaurant for dinner, then sat around my mother’s table again.  After she died we started going to the movies or fairs or art festivals.  This summer we started hiking.  Sometimes we meet for breakfast.  Usually for dinner.

My sister’s mother-in-law had a sister.  The two of them lived to be almost 100 years old.  They both died at the age of 98, two years apart.  The last few years of their lives were difficult, but well into their nineties they were fit and strong, active and aware.  My sister and I hope to be as lucky.  There’s a saying,

“Life isn’t about waiting for the storm to pass, it’s about learning to dance in the rain.”

Sisters are the ones who toss aside the umbrella and dance in the rain with you.

In Africa they say, when a man dies, an entire library is lost.
Stay up to date on LenaSalina workshops and lectures by signing up for email updates.
Join Our Email List


Mass Library Association
I will be presenting a brief overview of my Library Lecture series at the MLA annual conference on Tuesday, May 21 at 4:20 pm. in Framingham.